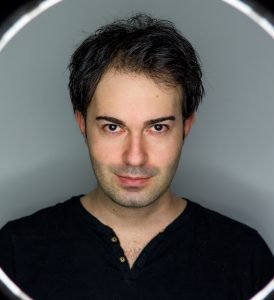 Mehmet S. Yıldırım is a New York based composer, videographer, and graphic designer. He holds an M.F.A. in Musical Theatre Writing from New York University, Tisch School of the Arts.

His musicals include Teach For A While (NYU / Tisch), The Day Boy and the Night Girl (Barrington Stage Company), and Apocalypse 101 (NYU / Tisch). His works have been performed at various places including Barrington Stage Company, Prospect Theater, The Times Center and 54 Below. He has been a resident at 92Y’s Musical Theatre Lab, and a fellow at NYFA’s Immigrant Artists Program.

As a videographer and graphic designer, he has worked with prominent theatres including Vineyard Theatre, PS122, and Ars Nova.

He studied writing with Michael John LaChiusa (Hello Again, The Wild Party), Rachel Sheinkin (25th Putnam County Spelling Bee), Sybille Pearson (Giant), Kirsten Childs (The Bubbly Black Girl Sheds Her Chameleon Skin), and Mel Marvin (How the Grinch Stole Christmas) among others. He presented work in various master classes, including Adam Guettel (The Light in the Piazza), Rebecca Taichman (Indecent), and Bruce Coughlin (Grey Gardens, The King and I). His other degrees are a B.S. in Materials Engineering; and an M.A. in Architectural History, focusing on Ancient Greek and Roman Theatre.

He is a member of the Dramatists Guild of America.